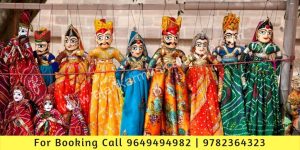 India (Bharat) is said to be the house of puppets, but it is yet to awaken to its limitless possibilities. The earliest reference to the art of puppetry is found in Tamil classic ‘Silappadikaaram’ written around the 1st or 2nd century B.C.

Almost all types of puppet shows are found in India. Puppetry throughout the ages has held an important place in traditional entertainment era. Like traditional theatre, themes for puppet theatre show are mostly based on epics and legends. Puppets from different parts of the india have their own identity. Regional styles of painting, sculpture, clothing are reflected in them.

Puppet Form in indian culture By there reigns :

The puppets in Rajasthan are one of the popular sources of entertainment in the rajasthan state. The art of puppetry is practiced by a community of agricultural laborers of Rajasthan. Known as the Bhats, these people have been associated with Rajasthani string puppetry to carry forward their traditional occupation. Though they belong, originally, to the Nagaur area in the Marwar region, they travel all through the countryside to exhibit their skills. Also known by the name of the “kathputliwalas”, they usually perform the puppet shows during the late evenings with stories/songs.

RAJASTHANI PUPPET, string puppet found in the state of Rajasthan in north western India. It is controlled by one string/thread that passes from the top of the puppet’s head, over the manipulator’s hand, and down to one shoulder and controls the body. The shrill voices characteristic of the Rājasthānī marionettes are produced by the head puppeteer, who speaks through a bamboo reed.